This page is still ongoing some changes! 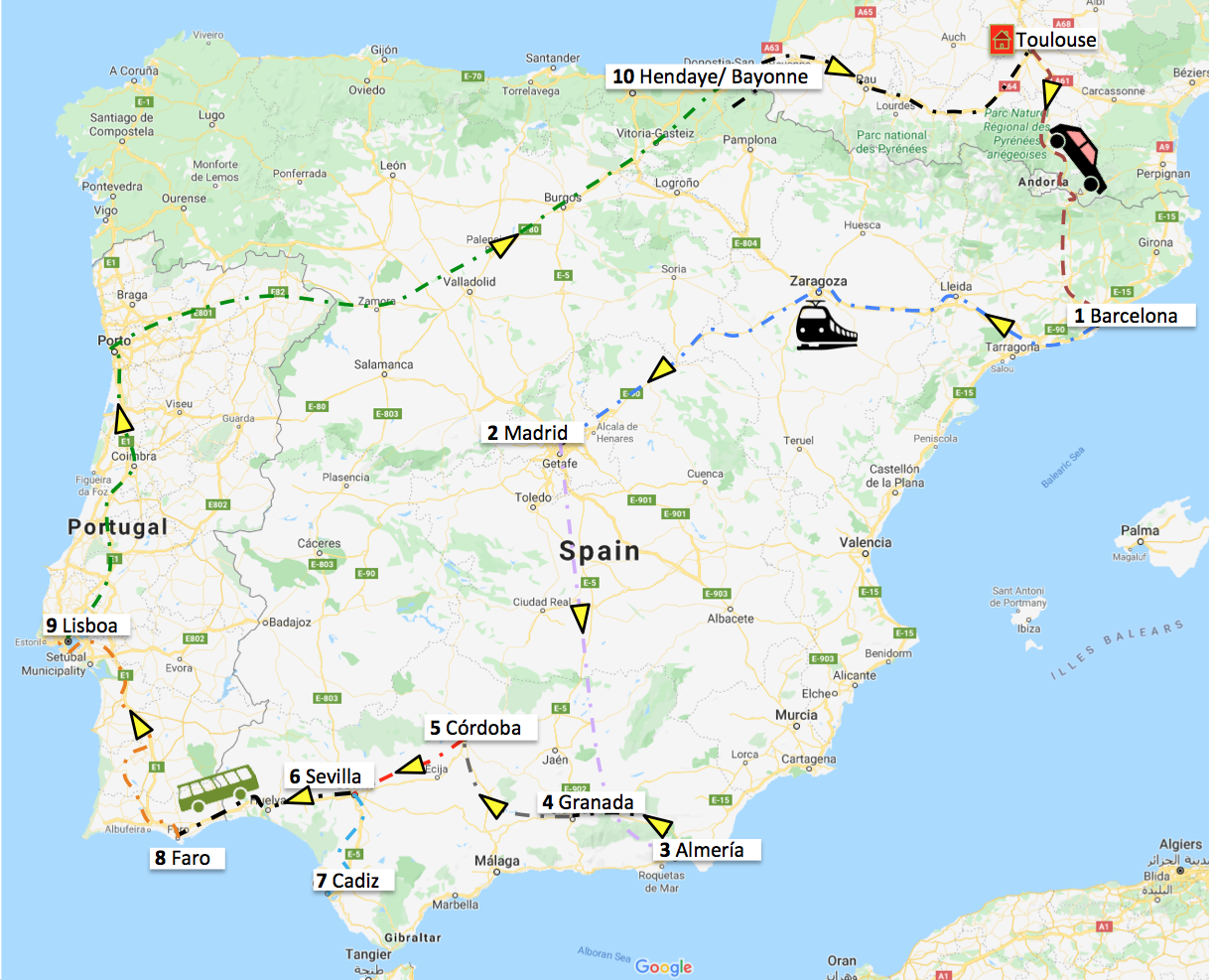 From South of France to South of Spain

We started our journey from Toulouse with the idea to reach Barcelona by train (regional train), via Latour-de-Carol/Entveitg (in the mountains), which, despite tacking a bit longer, is much cheaper than high-speed trains to Barcelona. However, due to strikes in France that particularly affected trains, we went to Barcelona by car (car sharing). We were lucky enough to find a ride in the morning and could enjoy a sunny afternoon in Barcelona!

Once in Barcelona, you have different options to reach Andalucía: Either you take a high-speed train (AVE trains) to Madrid and then a regional train (Talgo trains) to Almería, or you can go through Alcazár de San Juan instead of Madrid with Talgo trains (longer but cheaper). Unfortunately we could not make it through Alcazár de San Juan as trains were all fully booked to go to the Don Quijote city: Carnival was happening at the same time and we were not quick enough to book our tickets!

Barcelona Tip: If you are in the Sants district for a train connection and have a bit of time to go around, try the Pickwick Bar (Carrer de Sant Jordi, 3, near the Sants market and connected to the Carrer de Sants). The place is a local spot, held by a couple in their 50s and they serve very good home-made tapas!

We left Barcelona (Sants) in the early morning the next day to reach Madrid (Puerta de Atocha) in about 3 hours, giving us 5 to 6 hours before our connection to Almería. We spent the afternoon at the Parque del Retiro, a big green spot in Madrid where you can visit the Palacio de Cristal, a glasshouse hosting exhibitions, and closeby, the Palacio Velazquez, which also hosts contemporary art.

From Madrid, we took the Talgo train that passes by Alcazár de San Juan and lets you admire the majestuous windmills (Molines) to finally reach our first destination in Andalucía: Almería!

The train from Madrid to Almería takes you through various landscapes, leaving the mountainous region of Madrid to reach the southwest part of the country in about 6-7 hours.
The weather in Almería is very different from the other places we went to. The city is warm (15-20° when we were here, at the end of December) and pretty dry due to the proximity of a desert in the surrounding area (the Tabernas) and is home to loooot of orange trees! This is highly contrasting with the snowy mountains of Sierra Nevada!
During our time in the city (one day and a half), we walked around the town and climbed up to the Christ Statue (San Cristobal), which offers a panoramic view on the city, the sea, on the fortress walls and on the district of La Chanca (a district built against the mountain with squary and colourful little houses). Despite failing to visit the Alcazaba (fortress) because of opening days and Christmas holidays, we really enjoyed walking in the old streets of Almería. Unlike Granada and Sevilla, the city is much less crowded and yet worth visiting. It has a beautiful and peculiar Cathedral-fortress (!): Built on the location of a mosque (destroyed by an earthquake), it has a flat roof. Indeed, it was used as a defence building against invasions coming from the sea. Plus, there are lots of cute places where you can have good beers and tapas. Try the Tigre Ciego (Plaza de la Administración Vieja), a very cosy place with amazing beers and tapas! If you plan to visit the Alcazaba, you can make your way by walking through small streets with colourful houses.
In the modern part of the town, look for the Casa de las mariposas (‘Butterfly house’), an Art Deco building built in the early 1900s. Finally, if you have time for a museum visit, I would recommend the Museo de arte Doña Pakyta (close to the harbour), exhibiting Almerian art of the last 150 years. If you are hungry by then, you can get some tapas at La Hormiguita near the Fish fountain in the Parque Nicolás Salmerón (the promenade along the sea side, close to the Ramblas).

Travelling by train is ideal to see the changes in the vegetation and the geography. For instance, Almería is located between the sea, snowy mountains, and the desert. To reach Granada, we went through rocky areas and small hills and lots of tunnels. The orange trees are replaced by olive trees and the the ground is covered with orange sand. The hills are turning into small rocky mountains as we are going around the Sierra Nevada to reach Granada.

Arriving to Granada from Almería made us realise that it was winter as it got much fresher! However it also felt like the air was purer and the view on the close mountains as we were walking on the Avenida de la Constitucion reminded me a bit of Grenoble, a French city in the Alps. I would advise to take this path to reach the city centre to admire the many statutes on the way and for the open view on the mountains.

Granada is best known for the Alhambra, a palace and fortress complex, really worth visiting. However, due to its touristic success, visits are limited so you should by all means book your tour/ticket in advance! (here for the official website: https://www.alhambradegranada.org/ + Beware of scam websites!) You will find different visit types and tour options and different prices.
There are three main parts composing the Alhambra: the Alcazaba (the fortress, from the Arabic ‘alQasba’), the Nasrid Palaces and the Generalife (the gardens). The must-do is a visit of the fortress (‘General Day Visit Tickets’). If you have enough time, you should definitely also visit the Nasrid Palaces. Even nicer is to book your Palace visit at the end of the day so you can enjoy the night atmosphere of the location. You can also opt for a guided tour to learn more about the history of the buildings or simply bring your touristic book along if you’re not so much into group visits!

As a glimpse of the rich history of the place, I’ll give you a short description of the entrance door of the ancient city (Alhambra). The entrance door is was built in a typical muslim style in the shape of a horseshoe. Above the door, you can see the hand of Fatma, representing the 5 pillars of Islam: Faith, Fasting during the holy month of Ramadan, Charity to the poors, Praying, and Pilgrimage to the Mecca. Below the hand of Fatma, you can find a statue of the Virgin Mary and her child Jesus. Below it, a key with a powerful legend that says that the day Fatma’s hand and the key meet each other, it will mean the destruction of the city. The door alone symbolises the history of the Alhambra, gathering symbols of the two main religions of the area: Islam and Christianity.

I took so many pictures and yet they barely show the amazingness of the place! I was really impressed by all the fine details and engravings on every doors and windows, the inner patio and courts of the Palaces, the richly decorated ceilings, the mix between coulourful tiles, wall caligraphies and engravings, and arabesques, as well as the building period of the different edifices. It was something to see pictures of such places, and a completely different experience to actually have the chance to visit one!

From Granada to Sierra Nevada

It takes 45 minutes by bus to get to the ski resort from the autobus station (Autotransporte Tocina S.L.: 5€ per person per trip). Once you get up there, you can enjoy the resort and do some skiing or choose to hike. We chose the second one. You can find different hiking paths on this website: (https://treksierranevada.com/)[https://treksierranevada.com/] or on this one: http://www.juntadeandalucia.es/. Be prepared for the snow! Sierra Nevada are high mountains (Mulhacén is the highest peak, at 3,479 metres) so you might want to have specific equipment (hiking shoes and warm clothing).

Despite being a small town (compared to Sevilla and Granada), Córdoba has an intense history as you can tell by the different important monuments in the city. It is mostly known for its Mezquita-Catedral, a grandiose complex. The inside of the monument is impressive: there were double arches everywhere to hold the ceiling. There were several extensions to the Mosque made by different Muslim Kings and in the end the Mosque could welcome 90.000 prayers!! Before being a Mosque, the building was a Wisigoth church. After being a Mosque it became, and still is, a Cathedral. Fortunately, Christians respected most of the structure and it is then very impressive how they managed to add chapels in the aisles of the Mosque. In the centre, however, they made major modifications to the original builing in order to add the choir of the Cathedral. You can see a gradient from the red and beige arches giving a sort of muted ambience to the Mosque, from which you can still admire the Mihrab, that indicates the direction of the Mecca, to the white and luminous atmosphere of the Cathedral, especially in the centre where an extra layer was added to the building with high and richly decorated ceilings. Impressive mix and interesting opposition between a sober and an exuberant architectures! Outside, in the patio, you will see many orange trees and a small fountain in its centre.

We spent a whole afternoon walking around Sevilla. We had a long walk from the central Zona de Monumentos, which includes the Alcázar and the majectic cathedral, to the river and the Torre de Oro (Golden tower), up to the impressive monument of the Plaza de España (built for the Ibero-American exposition of 1928 and representing all the regions of Spain and their specificities).
Sevilla is a beautiful city with lots of buildings in the Art Deco style, full of colours, with lovely balconies and verandas. I actually discovered that Sevilla is home to a specific architecture style: Mudéjar, which is a blend of Moorish/Arabian and Gothic influences.

We left Sevilla to reach Faro by coach (Alsa company). It is a 3-hour journey over Huelva. We had not realised there was a time difference between Portugal and Spain (1 hour less in Portugal), which made our bus journey longer than expected! That’s how you learn :)

As we only had one afternoon to spend in Faro, we mostly walked around, enjoying the sunny weather. What I loved about Faro is the mix of coulours and textures on houses in the Old Town and the cute stores in the more modern part of the town. I bet there are much more people in spring and summer, but by the time we were there (early January) the city was very quiet, contrasting with Sevilla where we were the days before!
What we did not have time to do but is apparently worth trying: a boat cruise to explore the surroundings. Renting a car to go around is also a nice thing to do.